 Category Candidate, Employer Articles
November 14, 2022
It seems like every other day you read about some company being bought by or merging with another company. Almost everyone lets news like this go out of sight and out of mind shortly after hearing/reading about it, but not the people who work for companies involved in such mergers (and acquisitions). For these people mergers are typically stressful and disruptive and at worst mergers cause some employees to need to find a new job. Why? Because after merging 2 companies in similar industries there is always a level of redundancy: more employees doing the same job than what is needed. More than 30% of employees are deemed redundant after the average merger, statistics show. Read on to learn more about what to do if you find your position becoming redundant.

Human instinct when facing such a situation is to panic and start worrying about whether or not you will be let go, reassigned, etc. HR experts say that this is rarely a successful or helpful strategy though and that employees should realize they have more control over the situation than they may think. They say that a “prepare for the worst, hope for the best” strategy is much more helpful. By assuming that you will be let go that lets you mentally move forward to what you need to do next: polish up your resume, re-establish contacts in your professional network, start considering where else you would want to work, etc. If the worst case happens you can be ready for it and if it doesn’t then assuming you like your current position, you’re fine.

Another thing that HR experts say is helpful for employees deemed redundant is to clearly write out and plan on being able to communicate why exactly you stand out from other similar employees. Why? Because that is the question that will inevitably be asked directly to you or will be discussed about you by higher-ups as they look at which employees to keep and which to let go. What about your personal/career background makes you a real asset in the position? What value have you already provided to the company? What additional value could you provide? Questions like these should get the ball rolling.

Many employees, especially if they’ve been with the same company for many years, take a merger as an opportunity for a “change of scenery,” whether they get the same job at a different company or try a different job altogether. Because they’ve typically been out of the job seeking process for a long time, such people typically enlist the aid of a staffing/recruiting agency to make the search as easy and efficient as possible.
 Tags company 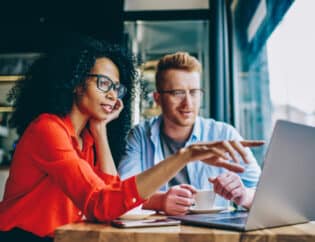 vamtam-theme-circle-post
 Category Candidate
Research studies regarding remote work, aka working from home, have gotten an influx of data...
 Tags work myths
Read More

This website uses cookies to improve your experience. We'll assume you're ok with this, but you can opt-out if you wish. Cookie settingsACCEPT
Privacy & Cookies Policy

This website uses cookies to improve your experience while you navigate through the website. Out of these cookies, the cookies that are categorized as necessary are stored on your browser as they are essential for the working of basic functionalities of the website. We also use third-party cookies that help us analyze and understand how you use this website. These cookies will be stored in your browser only with your consent. You also have the option to opt-out of these cookies. But opting out of some of these cookies may have an effect on your browsing experience.
Necessary Always Enabled
Necessary cookies are absolutely essential for the website to function properly. This category only includes cookies that ensures basic functionalities and security features of the website. These cookies do not store any personal information.
Non-necessary
Any cookies that may not be particularly necessary for the website to function and is used specifically to collect user personal data via analytics, ads, other embedded contents are termed as non-necessary cookies. It is mandatory to procure user consent prior to running these cookies on your website.
SAVE & ACCEPT
The New 4-Day Work Week: Who Is Trying It & What Are the Results?