 Category Employer Articles
September 28, 2020
Not many people in today’s modern workplace remember the world before a little company called Microsoft was founded. Likewise, the trusty PowerPoint software from Microsoft Office has been used to communicate a near endless stream of ideas over time, across the world. By this point though, people have become so numb to PowerPoint presentations because they have had to endure so many bad ones. Who among us has not experienced (typically against our will) a horrible PowerPoint presentation that made us want the computer or projector to stop working? You don’t want to be that person, do you? Read on then to learn some tips to put some zing into your next PowerPoint presentation, for your sake and for the sake of your audience.

At any given moment, what should be on the screen is the thing you’re talking about. Audiences almost instantly read every slide as soon as it’s displayed so if you have the next four points you plan to make up there, they’ll be three steps ahead of you, waiting for you to catch up rather than listening with interest to the point you’re making. Plan your presentation (specifically the transitions between and among slides) so just one new point is displayed at any given moment. Bullet points can be revealed one at a time as you reach them. Charts can be put on the next slide to be referenced when you get to the data the chart displays. Your job as presenter is to control the flow of information so that you and your audience stay in sync.

Some veterans at giving PowerPoint presentations say that images add visual interest and keep audiences engaged, but others say images are unnecessary distractions. This article’s suggestion is to split the difference and use images only when they add important information or make an abstract point more concrete. Otherwise, just get the information out there so your audiences can absorb it, then the PowerPoint presentation can be concluded (and not dragged on).

vamtam-theme-circle-post
 Category Employer Articles
One of the potentially frightening things about being a manager is the need to make...
 Tags management decisions
Read More 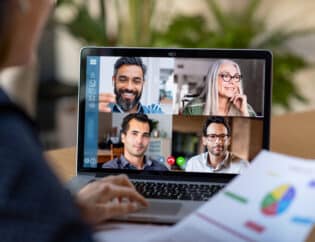 vamtam-theme-circle-post
 Category Client, Employer Articles, Employer Articles, Employers Home Sidebar Testimonial, Podcasts
Len Adams, CEO and Founder of ACG Resources was invited as a guest on the...
Read More

This website uses cookies to improve your experience. We'll assume you're ok with this, but you can opt-out if you wish. Cookie settingsACCEPT
Privacy & Cookies Policy

This website uses cookies to improve your experience while you navigate through the website. Out of these cookies, the cookies that are categorized as necessary are stored on your browser as they are essential for the working of basic functionalities of the website. We also use third-party cookies that help us analyze and understand how you use this website. These cookies will be stored in your browser only with your consent. You also have the option to opt-out of these cookies. But opting out of some of these cookies may have an effect on your browsing experience.
Necessary Always Enabled
Necessary cookies are absolutely essential for the website to function properly. This category only includes cookies that ensures basic functionalities and security features of the website. These cookies do not store any personal information.
Non-necessary
Any cookies that may not be particularly necessary for the website to function and is used specifically to collect user personal data via analytics, ads, other embedded contents are termed as non-necessary cookies. It is mandatory to procure user consent prior to running these cookies on your website.
SAVE & ACCEPT
Keys To Reducing Turnover In Most IndustriesNavigating the New Normal In The Workplace